The new Speckled Sussex chicks, hereafter to be known as “the new laying flock” because that way we don’t have to hit the shift key, arrived one chick short and three DOA, but the hatchery made no cavil at replacing the birds.  We would have been dissatisfied with a mere credit for the cost of the birds, since we ordered with the size of flock we desired in mind; also, a credit for the chicks would not have covered the (considerable) cost of shipping.  The nice lady who took our call was very helpful, and in appreciation, we list here that Meyers Hatchery is strong on customer satisfaction. 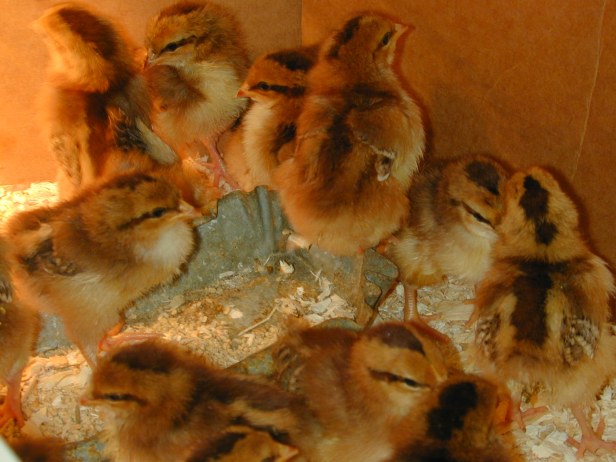 It is cool today — forty-seven degrees — and it is supposed to rain for the next five days at least, but should warm up.  The long wet season is affecting our rotational grazing, since the south pasture is wet as a bathsponge and not likely to dry up in the foreseeable future.  There are patches that are solid enough that S-3 put Isabel and the mini in paddocks for three days last week, and we saw first-hand why one makes spring paddocks large; standing at the kitchen window, you can trace the outline of the first two paddocks, grazed down to pale new grass.   We are always learning.  The third paddock was two or three times larger, and the animals only grazed enough to encourage the grass to send out more tillers.  Success. 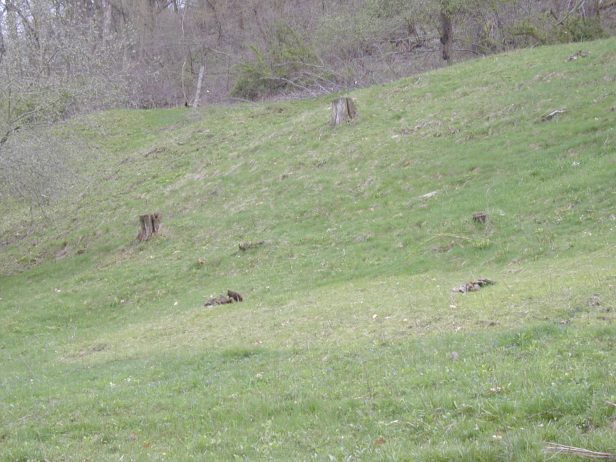 —  one end of Thursday’s overgrazed paddock  —

We planted seventy by forty feet of potatoes  — about 120# — but when the ground dries up again — as people were probably saying about the time God closed the Ark on Noah — we are putting out another seventy-five pounds or so.  The decision has to be made whether to plant the new tillage to sod potatoes, in order to embark the sooner on our milk-and-potato-fed pork experiment, — in which case we lose the advantage next year of a garden plot that has not yet been used for potatoes — or to plant the new sod to buckwheat, postponing the potato-pig experiment (see piggies), but giving us a well-tilled and manured plot for potatoes next year.  We’ll let you know how the decision comes down.  Maybe we need to till another couple hundred square feet.  That’ll excite the sons who run the tiller.

The men set up another 300 gallon tank for rainwater, this one receiving the rain off the west side of the garage roof.  Should fill up soon, given the forecast.  This water-hog  is to provide for the needs of the raised beds that serve the house, not that there seems any immediate danger of those drying out.  It is fortunate that we got the spring seeds in before the Deluge really got going; the peas, as Elizabeth Enright has it, are “more than just a ruffle”, the over-wintered lettuce will soon be providing the table, and the spring planted greens, beets, and carrots are just showing.  These should provide a much-needed spring tonic; we are all dragging through this dilatory spring.  When one of us offered a pint of blood to the Red Cross recently, the offer was rejected because the donor was anemic — and we eat red meat almost every day!  When the nettles finally come up, we will have to have nettle soup.

Today we drag because it is Good Friday.  Catholics abstain from meat on Fridays during Lent — many do so on all the Fridays of the year — but on Ash Wednesday and Good Friday they also fast, eating half or less than on a normal day.  What others do for their figures, Catholics do to express their identification with their Christ, and, furthermore, to practice for a day when they might have no choice about suffering for their beliefs.  I find these practices and attitudes strangely athletic and real; like the art and architecture of most of the church’s two thousand years, it strikes a note of longevity in me, as though ancient things, things I once only met in books ,suddenly stepped off the page and began breathing.

We are looking on Craig’s list for a honey extractor — expensive — and pricing replacements for our grain mill — also expensive.  We never had an extractor, preferring to cut the comb from the frame and use new foundation every time, but as we grow more successful with our beekeeping, we think it may be worth our money to acquire an extractor.  Our old grain mill ate one of its gears, which to replace will cost us upward of $115, but a new grain mill begins at twice that figure.  Maybe we should just get the new gear, even though Beth has a pique with the grain mill company, because when they replaced our stones eighteen months ago, they didn’t clean the adhesive out of the drive pocket, and the mill ran crooked for a year and a half before we figured out the problem, the company having sworn it couldn’t be the fault of the new stones, suggesting instead that we send them the mill — what does it cost to mail a twenty-five pound grain mill? — and they would let us know what they thought was wrong in two months or so.  Thanks.  Do we buy a new mill to avoid doing business with  these people, or buy a new gear for an otherwise quite satisfactory machine?

“I love the way the Dougherties capture both the soaring majesty and the down-and-dirty reality of farm life…. This book encourages and inspires all of us…. one you’ll want to refer to for years to come.”

– from the foreward by Joel Salatin

— to develop and share methods for regenerating waste, neglected or abused land and transforming it into small, fertile, diverse, self-sustaining farmsteads.